As we continue to strive for reduced emissions and air pollution, the electric car market is being flooded with new options. What used to be an obscure niche is becoming more mainstream every year with new EVs from mainstream and luxury brands alike. There are also some exciting new startups following Tesla’s
TSLA,

lead in producing high-tech EVs at high volumes. As a result, it’s getting easier to find an EV that fits just about any taste and any budget, and that’s a good thing for consumers.

Here are the mass-market EVs that are all-new for the 2022 model year. We are not including exotic supercars with limited production numbers.

A smaller option will join the Audi e-tron SUV in Audi’s subbrand of electric luxury vehicles. The newest members of the electric lineup are the Audi Q4 e-tron and Q4 Sportback e-tron. Though it has four doors, the Sportback is billed as a “coupe”-style variant with a sloping, fastback roofline. Audi estimates a range of 250 miles on a full charge and has confirmed that the starting price will be under $45,000.

The BMW i4 is an electric sedan that we’ve been waiting on for some time now, and it looks like it’s finally arriving for the 2022 model year. The tiny i3 and the exotic i8 have been around for a while. It’s finally time for an all-electric BMW that’s more like a traditional sedan, and the i4 fills that role. BMW
BMW,

estimates an all-electric range of up to 300 miles and a maximum rating of over 500 horsepower. The i4’s starting price is roughly $55,000.

The Chevrolet Bolt EV is getting a thorough refresh for 2022 and is being joined by the all-new Bolt EUV. While the two cars are essentially the same mechanically, the Bolt EV is a hatchback, and the Bolt EUV is in the style of a compact SUV. While the changes are subtle, they bring many different things to the table. For example, the Bolt EUV has more ground clearance, a little more back-seat space, and available Super Cruise hands-free semiautonomous driving tech. Chevy has confirmed that the starting price for the EV will be $36,500.

Also see: This is the electric car that costs the least over 5 years

When it came time to introduce its first mass-market all-electric truck, Ford already had the perfect name in its portfolio: Lightning. This name was tied to high-performance F-150 models from the 1990s and 2000s. When it goes on sale in spring 2022, the all-new fully electric Lightning is expected to have 563 horsepower and 775 lb-ft of torque, with a 0-60 mph time of about 4.5 seconds. That is the most power of any Ford truck. It will also have good towing capacity and plenty of work-friendly features, as well as an impressive range of up to 300 miles. Pricing will start at $39,974.

When comparing luxury cars, the Genesis G80 is arguably the best value in midsize luxury sedans. It’s about to get even better with the new Electrified G80, offering the same excellence as the gas-powered model but with an electric powertrain with an estimated 265 miles of range. If the rest of the Genesis lineup is any indication, we expect the Electrified G80 to be very competitively priced compared with other electric luxury sedans.

The current Hyundai Ioniq is a small hatchback available as a conventional hybrid, plug-in hybrid, or EV. However, the Ioniq is about to become an electrified subbrand of Hyundai,
HYMTF,

with the Ioniq 5 as its debut model. This small crossover has a futuristic look both inside and out, and it promises an electric range of almost 300 miles, putting it up there with top mileage EVs. It’s a 2022 model slated for a fall 2021 release, but there has yet to be an official price tag set for the car.

The Kia EV6 is launching alongside the mechanically similar Hyundai Ioniq 5. However, this Kia has a unique profile that blurs the lines of hatchback, wagon, and SUV, giving it an interesting look and a roomy, practical interior. Kia
000270,

says production of this EV will begin in late 2021 to be launched in “select global markets,” and we expect North America to be one of them. When the EV6 does come to North America, we expect the pricing to start at $45,000.

has grown a well-earned reputation for building excellent crossovers that are fun to drive and more upscale than their price tags suggest. The brand is now applying that formula to an EV in the form of the Mazda MX-30. Its size is similar to the CX-30 subcompact crossover, with the major difference of an electric powertrain. One of its more exciting and unique quirks is its swing-out “freestyle doors.” Upon release, we expect the 2022 Mazda MX-30 to start at around $32,000.

More: How much does it cost to charge an electric car? We do the math

The upcoming Mercedes-Benz EQB is shaping up to be both a great EV and a great luxury SUV. It’s a compact SUV but it will have seating for up to seven people. Mercedes-Benz has promised some variety in the model range of the EQB, giving buyers choices like front- or all-wheel drive, various power ratings and battery capacities, and more. The similar gas GLB has a starting price of $38,000, so we can guess that the EQB will be a bit more than that in the $40,000 range.

The first all-electric luxury sedan from the Mercedes-EQ subbrand is the upcoming EQS. Inspired by the iconic S-Class, the EQS has an interesting cab-forward design with sleek lines and rounded edges to optimize aerodynamics, improving both performance and efficiency. Based on European figures, the electric range is over 470 miles, and it can make up to 516 horsepower. The mileage and horsepower alone make it worth its estimated $100,000 starting price.

The Nissan Ariya concept is making it to production as a 2022 model. Nissan
NSANY,

was the first to market with a mass-market EV in the form of the Leaf, and there’s finally going to be an electric Nissan SUV. There will be a single-motor front-wheel-drive model and a more powerful dual-motor AWD model. They will both be available with standard range or long range so you can get the one that best suits your budget. While Nissan has yet to release an official price, we expect it to be in the $40,000 range.

See: The 10 most affordable electric cars on the market

Rivian is an American EV startup that is ready for the big time. The first Rivian SUV to hit the market will be the R1S. It’s promising to be a particularly adventurous premium SUV, not too different from a Land Rover, but with an all-electric powertrain with up to four motors. The R1S boasts a stylish exterior, high-tech interior, and astounding capabilities that will make the R1S one of the most competitive SUVs on the market. Rivian is looking to compete with luxury car brands, with the R1S having a starting price of $70,000.

The Rivian R1T will be the first all-electric pickup truck available in North America. It’s promising exceptional capabilities with up to 11,000 pounds of towing capacity and a 0-60 mph time of as little as 3 seconds. More configurations of the R1T with different ranges and different pricing will gradually become available over the next year or so. The R1T will have a similar price tag as the R1S, as it will be $75,000.

Cybertruck is the concept that launched a thousand memes, but it will be a real production vehicle soon enough. Promising the capability of a truck with the performance of a sports car, the Cybertruck appears to be one EV that really does it all. Its wildly unconventional look is sure to stand out wherever it goes, and it’s available to order right now with a refundable deposit of only $100. But don’t get too excited by the cheap deposit, as the truck has a starting price of $39,000.

Read next: Curious about EVs? Here are answers to common questions about electric cars

has been on a roll building stylish, luxurious, and safe SUVs that are seriously competitive with their German rivals. The upcoming Volvo C40 Recharge has a lower and sleeker design than the average SUV. This gives it a sporty look without losing the practicality of a small crossover. Production will begin in fall 2021, and the range is estimated at around 260 miles. This sporty SUV is a bit more expensive than others, with an estimated price tag of $55,000.

This story originally ran on KBB.com. 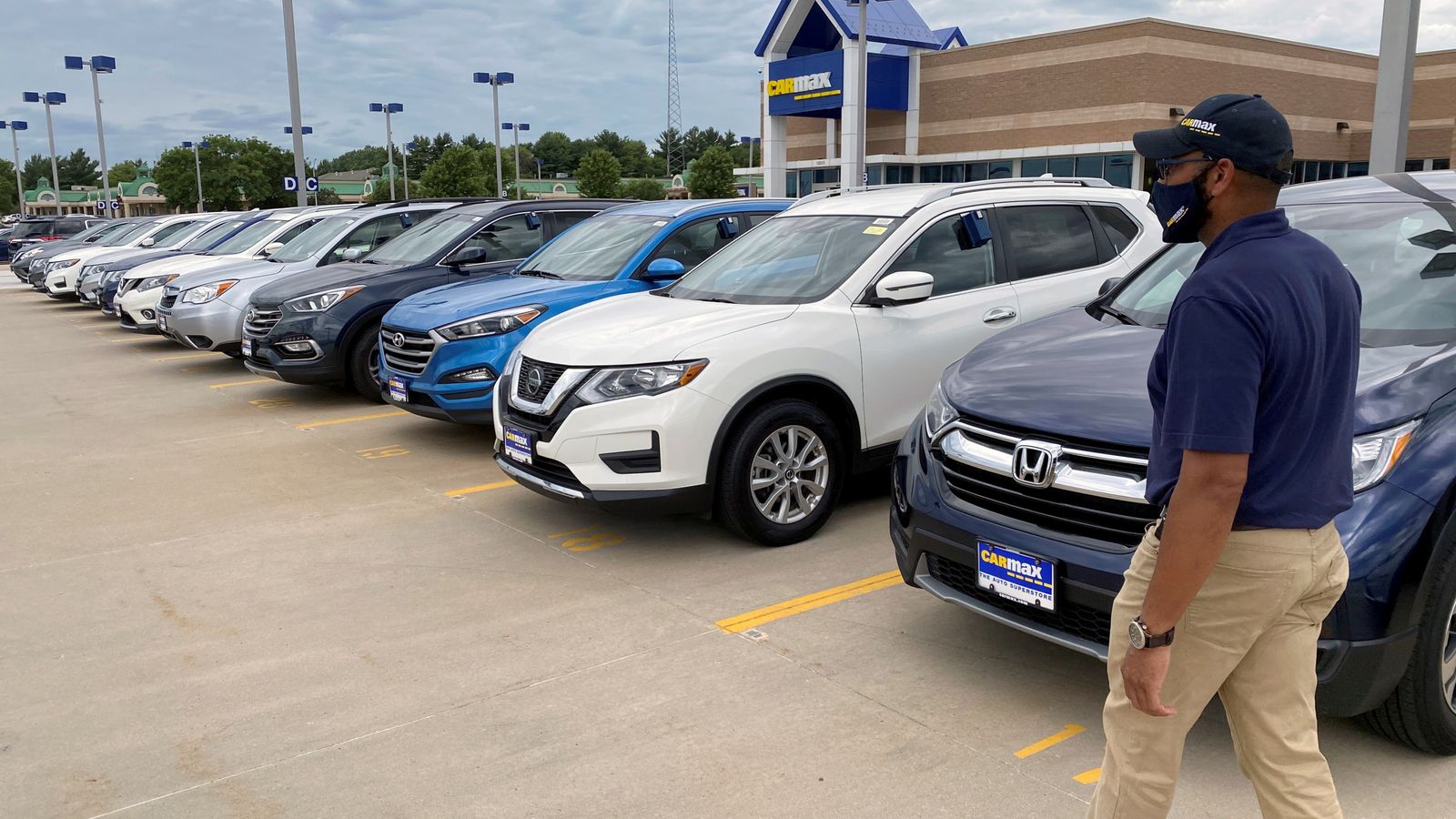