Gooding & Company has revealed a lineup of exemplary blue-chip classics from the greatest German automotive marques for its 2023 Amelia Island Auctions. This March, the two-day auction event will feature a number of iconic offerings from Mercedes-Benz, BMW, and Porsche, including a 300 SL Roadster, a 300 SL Gullwing, a 507 Series II, and several iconic 911 models. These classics will accompany the entirety of the firm’s catalogue on Gooding & Company’s auction stage at the Omni Amelia Island Resort on Thursday, March 2, and Friday, March 3. The highly anticipated live auction event, which takes place at one of Gooding & Company’s most attended venues throughout the year, will also offer virtual viewing and bidding capabilities, as facilitated through the company’s digital and mobile platforms.

‘Amelia Island has proven to be a fantastic venue for German sports cars, especially Porsches and BMWs. Over the years, we have presented some outstanding examples from these marques and are thrilled to return with another exciting offering in 2023,’ states David Brynan, Gooding & Company Senior Specialist. ‘Not only do we have a great group of Porsche road and racing cars, we’re offering a beautiful BMW 507 Roadster, and a selection of exceptional Mercedes-Benzes, including two stellar 300 SLs – a Rudge-wheel Gullwing and a disc-brake Roadster fresh from a complete restoration at the Mercedes-Benz Classic Center.’ 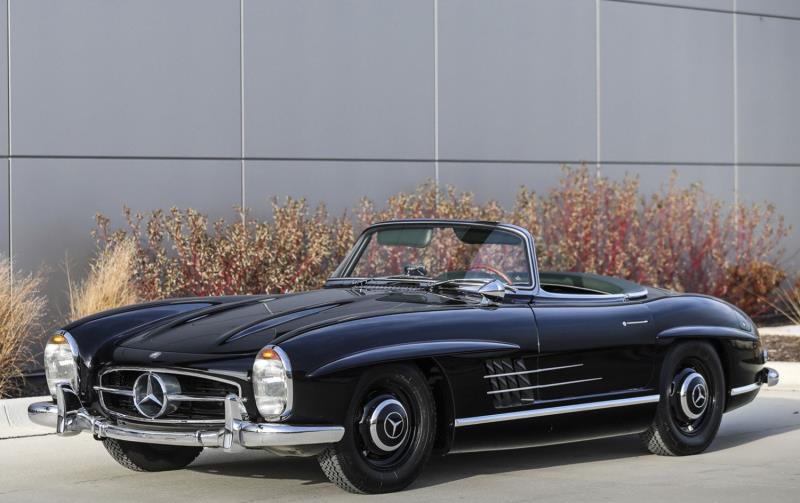 1962 Mercedes-Benz 300 SL Roadster (Estimate: $1,750,000 – $2,500,000)
Mercedes-Benz’s legendary 300 SL is largely considered to be one of the most beautiful and well-rounded sports cars ever produced, with a long-lasting legacy of status and influence in the automotive world. The 1962 Mercedes-Benz 300 SL Roadster offered here is a late-production, disc-brake, iron-block model, one of approximately 270 examples built before the introduction of the alloy-block version of the fuel-injected inline six-cylinder engine. To Mercedes-Benz purists and aficionados, these cars represent the ideal enthusiast specification, combining the improved stopping power of the four-wheel disc brakes, introduced in 1961, with the more robust and reliable iron-block engine. With a well-documented provenance from new, chassis 3047 has been housed under the care of just six owners, and was acquired by the consignor, a prominent American collector and established Mercedes-Benz enthusiast, in 2012. Since then, the current owner has commissioned a recent concours-quality restoration by the renowned Mercedes-Benz Classic Center USA of Irvine, California, and the car today presents beautifully in its period-correct color scheme of black over green. Throughout the past decade, chassis 3047 has received routine maintenance and has joined important rallies such as the California Mille and the Colorado Grand. Per its factory data card, this example retains its matching-numbers chassis, body, and engine, which, coupled with its well-known provenance and show-quality presentation, make this one of the finest disc-brake, iron-block 300 SL Roadsters to exist today. 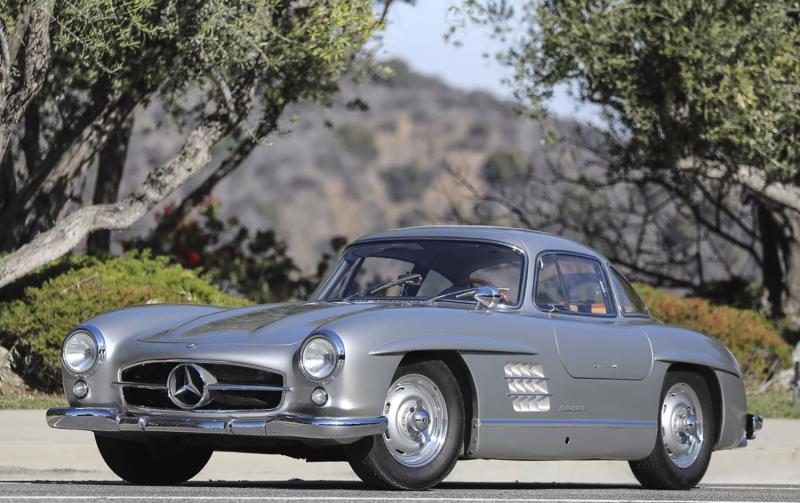 1955 Mercedes-Benz 300 SL Gullwing (Estimate: $1,500,000 – $2,000,000)
In late 1953, famed US importer Maximilian Hoffman encouraged Mercedes-Benz to build a series version of their successful 300 SL sports car, and a few months later, history was made when the 300 SL made its debut at the 1954 International Motor Sports Show in New York. The 1955 Mercedes-Benz 300 SL Gullwing on offer here, finished in Silver Grey Metallic (DB-180) over Blue Vinyl/Blue Plaid (Code L1) upholstery, has a remarkably well-known provenance from new, as documented in the authoritative Gullwing Registry published by the Gull Wing Group. This example has spent its entire life in North America; the highly optioned Gullwing was first sold to John Dick of Toronto, Ontario, Canada, and then joined the collections of various American collectors in Colorado and California. Acquired by the current owner in 2006, this Gullwing has enjoyed restorative work of the highest quality by marque specialists. The car’s legendary 3.0-liter fuel-injected engine was rebuilt and dyno-tested by Ed Pink Racing Engines, with the work completed in 2009-2010, and the body was restored by the world famous Nethercutt Collection in Southern California. This exquisite 300 SL Gullwing comes to Gooding & Company’s Amelia Island Auctions with its factory-equipped offerings, rare Rudge knock-off wheels, fully known and documented history from new, and undeniably stunning presentation. 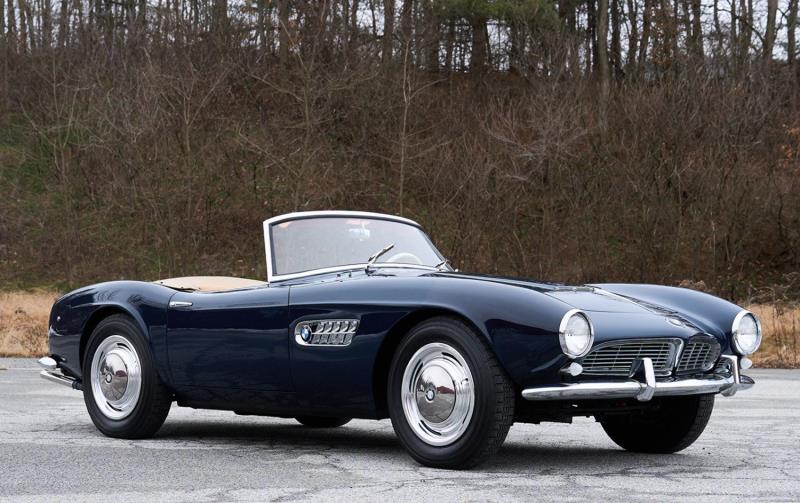 1958 BMW 507 Series II (Estimate: $1,600,000 – $1,800,000)
Upon its spectacular debut at the 1955 Frankfurt Motor Show, the BMW 507 roadster, designed by Count Albrecht von Goertz, quickly became one of the greatest automotive designs of all time. Relative to its contemporaries, most notably the Mercedes-Benz 300 SL, the BMW 507 was exceedingly rare, with just 254 examples produced in total. Of those, only 218 examples were built as Series II models, initially intended as a separate model for the American market which then became the production standard in mid-1957. The late-production 1958 BMW 507 Series II offered here, chassis 70183, is among the most rare, collectible, and iconic BMWs ever made, and initially came finished in the seldom-seen shade of Papyrus White. Chassis 70183 was delivered new to the official BMW importer Fadex Commercial Corporation of New York in 1959. In the early 1970s, it became one of the first classics acquired by well-known collector Oscar Davis, and was later owned by a limited number of collectors, including Anthony Wang, the notable Long Island-based Ferrari custodian. In recent years, chassis 70183, which was refinished in a dark blue exterior, received cosmetic and mechanical attention by the highly respected Sargent Metal Works of Vermont. This work included replating the brightwork, fitting a new exhaust system, thoroughly servicing the chassis, and retrimming the interior with high-quality beige leather and carpeting. Today, this roadster is eligible for many significant rallies, tours, concours, and BMW CCA events. This especially rare offering is sure to be seriously considered by the most experienced collectors of blue-chip classics, especially with its limited roster of owners, sophisticated color scheme, and routine professional maintenance. 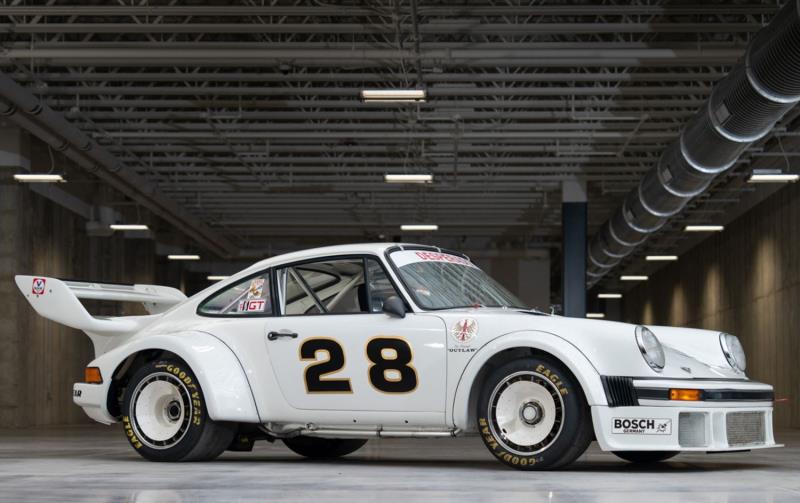 1977 Porsche 934/5 ($800,000–$1,100,000)
For the 1977 IMSA racing series, Porsche took 10 examples of its 934 model and incorporated several components of the 935 model, including the rear bodywork, wing, and wheels, thus creating the hybrid 934/5 model. The 1977 Porsche 934/5 presented here, chassis 930 770 0960, was the last of the 10 factory-built hybrid model examples produced, and was delivered new via famed Southern California Porsche dealer Vasek Polak to Ron Brown of Oregon. In the late 1970s, this example was raced in period by notable drivers including Ron Brown, Clif Kearns, Charles Mendez, and Milt Minter, and successfully campaigned in Trans Am and IMSA events, including the 1978 12 Hours of Sebring. Under the custodianship of its fourth owner, well-known Porsche specialist Kevin Jeanette, the 934/5 was restored to its 1977 specification by the highly regarded Porsche experts at Gunnar Racing, who also returned the car to its initial Desperado Racing livery. Since being acquired by the present owner from Mr. Jeanette in 2013, the car has participated in several historic races, including the Monterey Motorsports Reunion and Rennsport Reunion V and VI. It was also fittingly displayed at the Amelia Island Concours d’Elegance in 2021 in a class celebrating the legacy of the 935 model. Offered for sale from a significant American Porsche collection, this competition-proven, rare 934/5 comes to auction with an exceptionally important and impressive history in the world of racing and motor sports.

image06
1973 Porsche 911 Carrera RS 2.7 Touring (Estimate: $700,000 – $900,000)
The Porsche 911 Carrera RS was initially designed as a homologation special of the Carrera RSR for the FIA’s Group 4 Grand Touring class. The RS featured the race car’s components, including a thin-gauge steel body, as well as a stiffer suspension. Of the 1,525 examples of the Carrera RS produced, 1,308 were finished in the M472 Touring trim, such as the desirable first-series 1973 Porsche 911 Carrera RS 2.7 Touring offered here. These touring variants were equipped with many components from the M471 RS lightweight version, including the bürzel (ducktail) spoiler, flared fenders, forged alloy wheels, and gas shock absorbers. This example, chassis 911 360 0491, presents in its striking original Light Yellow livery, and retains its matching-numbers engine, per the Porsche Certificate of Authenticity on file. This RS 2.7 Touring was imported to the US in 2000, and sold through Porsche specialist Autofarm Motorsports to Alegra Motorsports, the team owned by race car driver Carlos de Quesada. According to correspondence on file, Autofarm mechanically recommissioned the RS 2.7 Touring prior to its import to the US. The current owner, who acquired the car in 2004, also commissioned an extensive mechanical and cosmetic restoration in original colors, and since then, this 911 has seen minimal use. Presenting beautifully today, this example joins Gooding & Company’s Amelia Island Auctions accompanied with receipts, correspondence, its Certificate of Authenticity, and details of its comprehensive, photo-documented restoration.

About Gooding & Company
Gooding & Company is celebrated for its world-class automotive auctions, private brokerage, and unparalleled service in the international collector car market, achieving over $2.5 billion in sales since the company’s inception. The auction house continues to deliver market-leading results through both its live auctions and Geared Online platform, setting new trends and world records with best-of-category cars across numerous verticals. Gooding & Company consistently presents the highest quality consignments while operating with openness and integrity, providing the company a reputation of trust and respect unmatched in the industry. Offering a wide range of services including private and estate sales, appraisals and collection management, the auction house is ready to assist you with numerous collector car services.
Photo credit: Gooding & Company
posted on conceptcarz.com

Mon Jan 23 , 2023
Photo: John Raoux (AP) The 2023 IMSA WeatherTech Championship kicks off future week with the Rolex 24 at Daytona and, with it, a new era of GTP hybrid prototypes. Involving Cadillac, Porsche, Acura and BMW, there’s a good deal of adjust to be enthusiastic about within the best course, but […]